Difference between DataFrame, Dataset, and RDD in Spark

I'm just wondering what is the difference between an RDD and DataFrame (Spark 2.0.0 DataFrame is a mere type alias for Dataset[Row]) in Apache Spark?

Can you convert one to the other?

A DataFrame is defined well with a google search for "DataFrame definition":

A data frame is a table, or two-dimensional array-like structure, in which each column contains measurements on one variable, and each row contains one case.

So, a DataFrame has additional metadata due to its tabular format, which allows Spark to run certain optimizations on the finalized query.

An RDD, on the other hand, is merely a Resilient Distributed Dataset that is more of a blackbox of data that cannot be optimized as the operations that can be performed against it, are not as constrained.

In general it is recommended to use a DataFrame where possible due to the built in query optimization.

First thing is DataFrame was evolved from SchemaRDD.

Yes.. conversion between Dataframe and RDD is absolutely possible.

Below are some sample code snippets.

Below are some of options to create dataframe.

where schema can be from some of below options as described by nice SO post..
From scala case class and scala reflection api 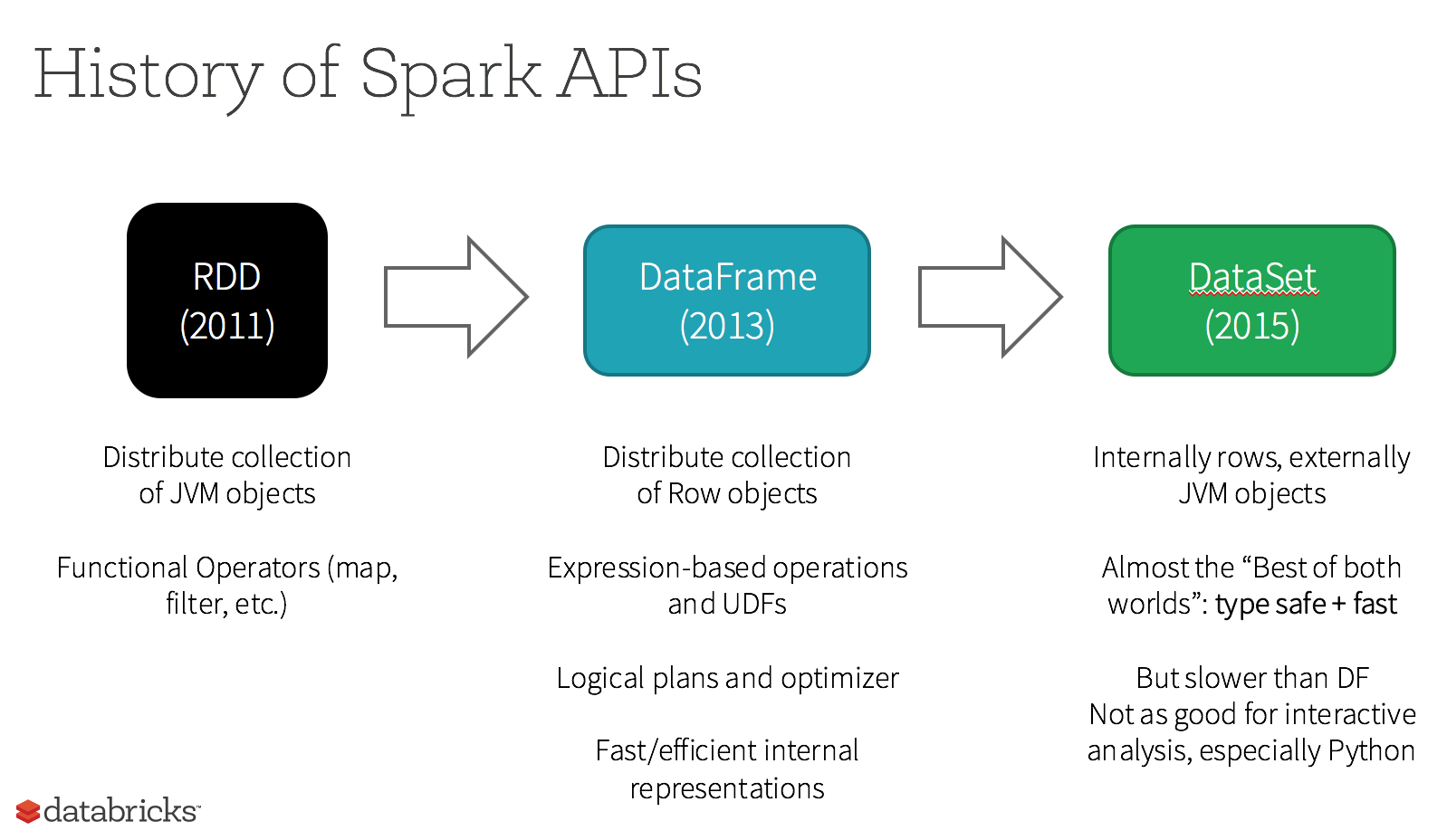 In fact there Are Now 3 Apache Spark APIs.. 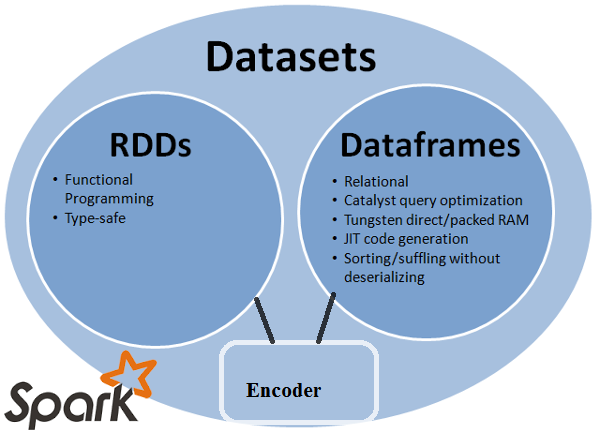 The RDD (Resilient Distributed Dataset) API has been in Spark since the 1.0 release.

The RDD API provides many transformation methods, such as map(), filter(), and reduce() for performing computations on the data. Each of these methods results in a new RDD representing the transformed data. However, these methods are just defining the operations to be performed and the transformations are not performed until an action method is called. Examples of action methods are collect() and saveAsObjectFile().

Example: Filter by attribute with RDD

Spark 1.3 introduced a new DataFrame API as part of the Project Tungsten initiative which seeks to improve the performance and scalability of Spark. The DataFrame API introduces the concept of a schema to describe the data, allowing Spark to manage the schema and only pass data between nodes, in a much more efficient way than using Java serialization.

The DataFrame API is radically different from the RDD API because it is an API for building a relational query plan that Spark’s Catalyst optimizer can then execute. The API is natural for developers who are familiar with building query plans

Limitations : Because the code is referring to data attributes by name, it is not possible for the compiler to catch any errors. If attribute names are incorrect then the error will only detected at runtime, when the query plan is created.

Another downside with the DataFrame API is that it is very scala-centric and while it does support Java, the support is limited.

For example, when creating a DataFrame from an existing RDD of Java objects, Spark’s Catalyst optimizer cannot infer the schema and assumes that any objects in the DataFrame implement the scala.Product interface. Scala case class works out the box because they implement this interface.

The Dataset API, released as an API preview in Spark 1.6, aims to provide the best of both worlds; the familiar object-oriented programming style and compile-time type-safety of the RDD API but with the performance benefits of the Catalyst query optimizer. Datasets also use the same efficient off-heap storage mechanism as the DataFrame API.

When it comes to serializing data, the Dataset API has the concept of encoders which translate between JVM representations (objects) and Spark’s internal binary format. Spark has built-in encoders which are very advanced in that they generate byte code to interact with off-heap data and provide on-demand access to individual attributes without having to de-serialize an entire object. Spark does not yet provide an API for implementing custom encoders, but that is planned for a future release.

Additionally, the Dataset API is designed to work equally well with both Java and Scala. When working with Java objects, it is important that they are fully bean-compliant. 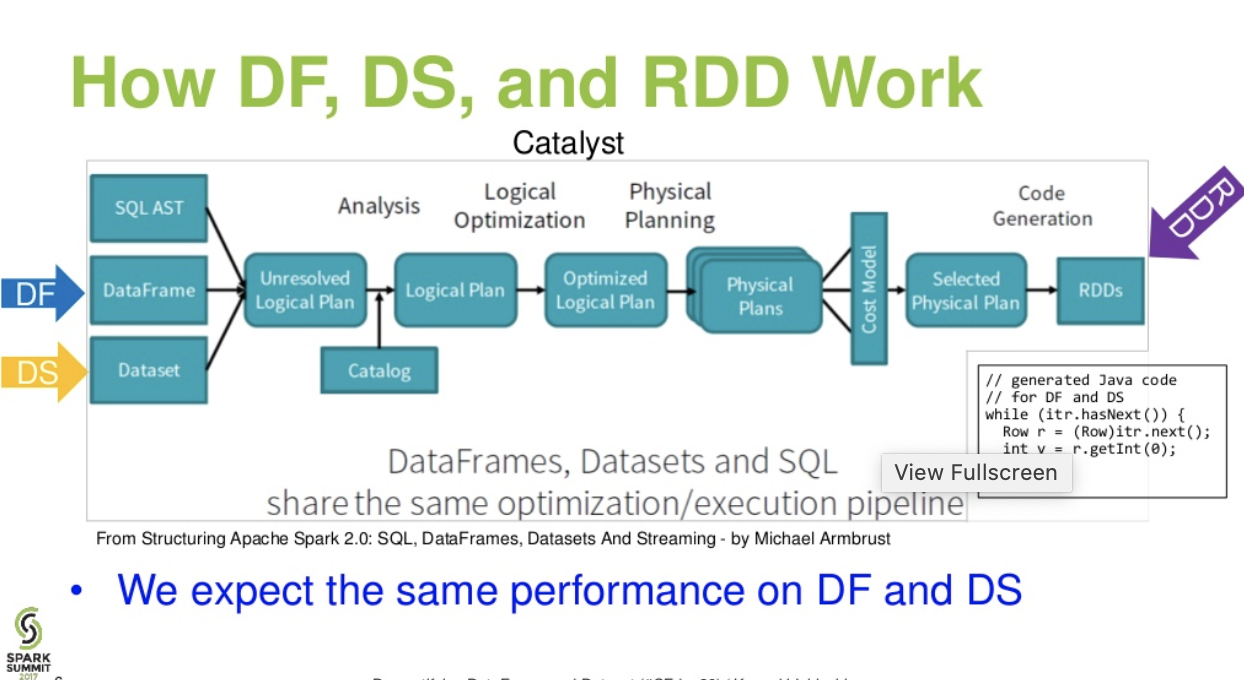